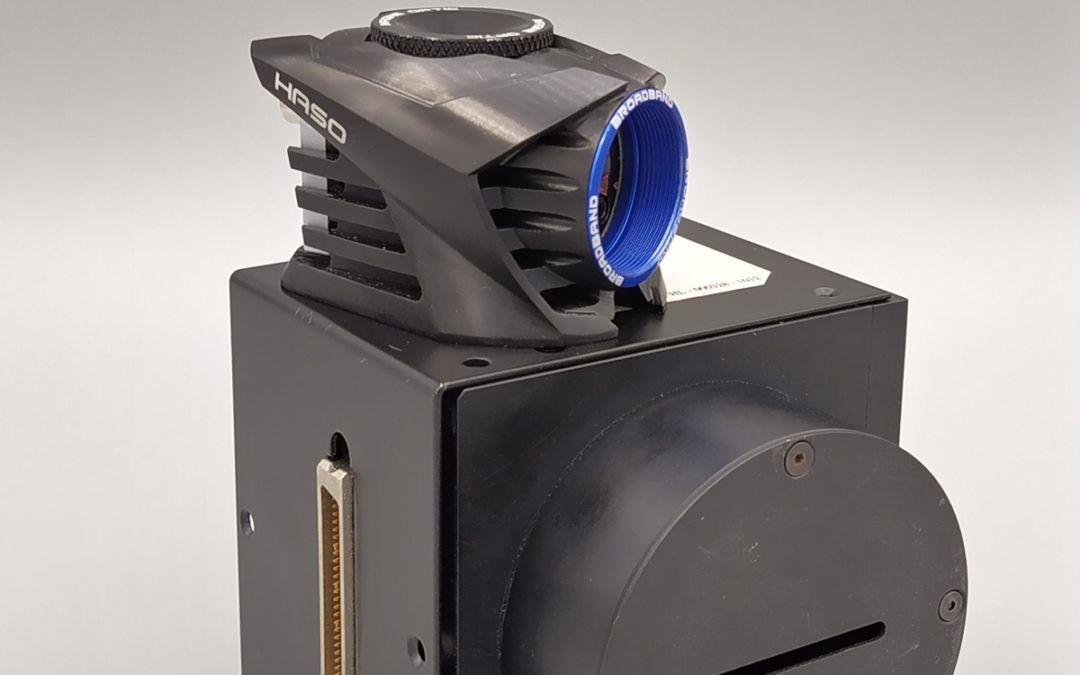 Founded in December 1996 by the pair of Samuel Bucourt and Xavier Levecq, Imagine Optic is a pioneer in the manufacturing of optical metrology instruments and systems based on the Shack Hartmann wavefront measurement method. This is how the story of the company is usually written, however some facets of history are easily masked or forgotten with time…

This series of articles will allow you to (re)discover the evolution of the commercialized products by Imagine Optic since its creation. Today, we focus on the H-Line, the forefather of our current family of HASO wavefront sensors. As introduced in our first article, the H-Line is derived from the PH-Line but functions as a standalone optical metrology sensor. Based on the Shack-Hartmann technology with a linear CCD, it was able to measure tilts, curvature and spherical aberration. It was a very competitive alternative to a wave-surface instrument, as rectangular CCD cameras were incredibly expensive back in 1997 (~10,000€, compared to a few hundred euros today).

This design allowed to have a huge amplitude of measurement (more than 10,000 λ) on collimated or very divergent/convergent beams, while maintaining the same λ/75 RMS absolute accuracy. One of its other advantages was the speed: because there was only a single line to measure, the frequency of acquisition was faster than 300 Hz in its standard version, which was outstanding for 1997, enabling users to adjust their setup in real time.
The development of the H-Line product lasted five years, during which Imagine Optic had the opportunity to establish comprehensive calibration processes for the instrument in order to reach unparalleled performances for this time. This R&D period was used to get a lot of knowledge and know-how in the manufacturing of wavefront sensors by discovering and addressing problems early on. These calibration methods continue to be used today for the production of every wavefront sensor we manufacture, more than twenty years later.

Once the first H-Line sensors were delivered, the first customers soon asked if it was possible to measure other aberration shapes, such as astigmatisms. The first solution of Imagine Optic was to apply a 90-degree rotation of the sensor in order to have two crossing lines to be able to obtain 21 of the first 36 Zernike polynomials, or a 45-degree rotation to obtain 32 of the first 36 polynomials. A second version of the H-Line was subsequently developed to directly incorporate two orthogonal CCD lines (and microlens lines) permitting the direct measurement of astigmatisms and coma. With this development the “H-Line 2D” was born.

The logical progression for the H-line was to replace linear measurements by measurements on a complete surface. The early 2000s saw a major reduction in price for rectangular CCD sensors which in turned facilitated the development of the “HASO” wavefront sensor, first manufactured in 1999, which implemented a rectangular CCD.